A Gentleman Writes:
I normally don't watch soccer on TV as I prefer more rugged sports such as American football, ice hockey and professional wrestling for my spectating entertainment. But, as a proud American, I will cheer for the USA in the World Cup.
When it comes to televised sports, I'm rather lenient with my wife and let her join me on the couch to watch regular season games and non-marquee wrestling match-ups.
But when football and hockey playoffs and high-priced pay-per-view wrestling are aired, my wife sits in the naughty chair facing the living room corner with ear muffs on so she won't distract me with silly questions and observations such as "why do they call it 'football' when players feet hardly ever touch the ball?," "hockey players have sexy butts," and "professional wrestling looks fake."
With the World Cup consisting of so few fixtures -- if the USA doesn't make it out of the group stage we'll only play three games -- I naturally consider televised matches to equate to "naughty chair time" for the little woman.
So I was rather taken aback when my wife complained that she should at least be allowed to watch USA play its three "group-stage" games. Of course I turned over over my knee, lifted her skirt, lowered her panties and spanked her bottom cherry red for challenging my decision.
But, as I've mentioned, being on the permissive end of the husbandly spectrum, I ultimately decided a compromise could be reached.
Instead of sitting in the naughty chair wearing ear muffs, once the TV is switched on, my wife will place herself naked across my lap on the couch. During the pre-match analysis, I'll give her plump behind a resounding spank with my hand every time a commentator says the word "ball."
This will ensure my wife is in proper submissive mindset and my manhood properly charged for her task during the Big Game: blowing my Big Unit.
Once the match begins, my wife will kneel before me, unzip my fly and take my nine-inch shaft deep into her throat, sucking diligently throughout the game. And, every time USA scores a goal, I'll celebrate the occasion with a Fourth-of-July-worthy explosion, blasting my love juice down my gal's throat.
(I'll permit a five-minute break after each goal to allow my wife to gargle with mouth wash and brush her teeth and for my batteries to recharge. I'm also allowing her a break at half time, as long as she maintains complete silence so I can concentrate on the experts' game analysis. The first peep from her and she's sitting in the naughty chair till the second half begins.)
Must sign off. USA's first match of the tournament is about to start. (I'm typing this message on my smart phone with my left thumb while using my right hand to spank my wife. The commentators said "ball" several times during the pre-match analysis and my wife's backside is beet red.)
Hoping for lots of American goals. Let the fun and games begin. USA!! USA!! USA!!
Kind Sir:
What a loving husband you are, allowing your wife to enjoy the audio portion of big soccer game and the pleasure of sucking your Big Unit at the same time. Two treats in one!
My husband no longer makes me sit in the naughty chair while sports are on TV, as I've learned from many spankings over the years not to disturb his concentration with silly questions and observations that untrained wives are apt to make.
But I found your plans for the Big Game so intriguing that I asked Hubby to treat me to the same.
As we're nearing our golden years, we normally require more preparation before indulging in such recreation. My adrenalin is pumping, though, and I've managed to loosen my jaw with the aid of a banana held in my left hand while typing this reply with my right. Now I'm off to the "powder room" to put on a shade of "blow-job red" lipstick and fetch Hubby an ED pill from the medicine cabinet.
Hubby just turned on the TV. I can hear the crowd's chanting. It's almost like being in Brazil.
USA!! USA!! USA!!
Posted by Claire Colinsgrove, aka 1950s Wife at 6:36 PM 3 comments:

May a Gentleman Splash Semen in His Sweetheart's Face? 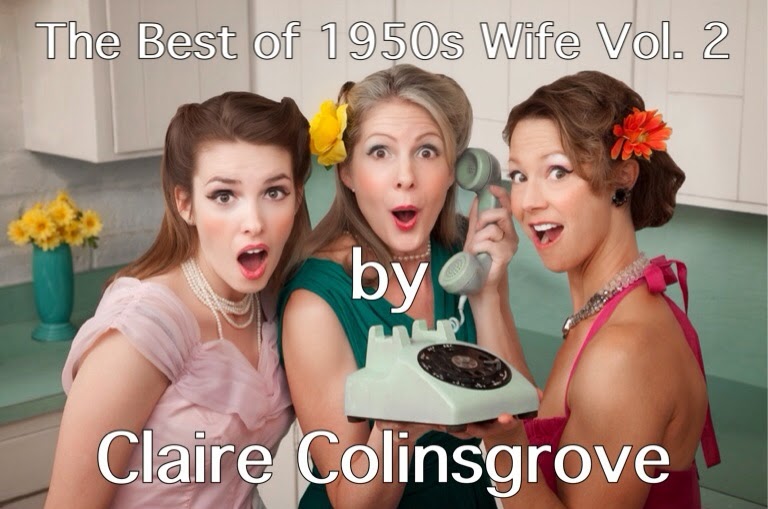