Spanking and the Single Gal

Dear 1950s Wife,
I've been a faithful reader of your advice columns for several years. Next to the textbooks for my undergraduate studies in domestic sciences at State U, there's no better primer than your blog to prepare a gal for her post-graduate career in married life.
But it seems you never post advice for those of us unfortunate enough to still be single after college.
Back in the good old days, nearly any co-ed plain or fair could count on catching a man at college and leaving school with her "Mrs" degree. But now even a good-looking gal must sometimes wait to the advanced age of 24 or 25 before Mr. Right is ready to pop the question.
I thought I had the matter settled, but my ex-beaux Billy broke our engagement off via text message late in senior year leaving me so bereft that I could barely hold my head up high at graduation.
With no husband to cook and clean for, I had to move back in with my parents. It's OK, though Dad paddles my backside for breaking curfew or not doing my chores.
But now that it's been six months, Dad says I must start paying rent. I never thought I'd need a job after college otherwise I would have trained to be a teacher or a nurse.
Whatever am I to do?
Mademoiselle:
Your situation is indeed heartrendering!
But you're better off without boorish Billy. And take heart. It's only been six months post-college. You've got a good two more years at least to get hitched before you risk turning into an old maid.
In the meantime you need to find suitable employment.
Ideally, the job will provide discipline and structure to better prepare you for married life, plus the benefit of limited prospects for advancement. Otherwise you might be tempted to climb the ladder and risk turning into one of those sad "career gals" in her 30s who, though she may have money, power and prestige, has only her pet cats to come home to.
I've researched the matter and these jobs stand out:
Wealthy Family's Whipping Girl
A whipping girl is the latest must-have accessory for the household of means.
Her behind provides a suitable target for a wealthy wife to vent frustration for her and spouse not receiving coveted dinner party invitations from the most prominent power couples, not being named to board of directors of the most prestigious charity balls, Junior not being admitted to Harvard, Yale or Princeton and other stresses of Top 1-percent life.
Husband typically spanks the whipping girl as a sexual release should wife be recovering from an exceptionally intense spanking the night before or an extra hard-pounding session of anal sex.
And if a whipping girl happens to be placed with a traditional family that believes in corporal punishment as a parenting technique, she goes over Mom and Dad's knee when the children are naughty.
"Breastaurant" Waitress
The "breastaurant" is the 21st-century's greatest dining innovation. Whether dressed as Catholic schoolgirls, cheerleaders or sluts, waitresses at these establishments wear skimpy outfits that highlight their ample bosoms, curvy bottoms and shapely legs.
Wearing such uniforms prepares a gal for her future career wearing sexy outfits husband insists she don prior to sex, when serving him fried beef jerkey and other comfort food while watching the Big Game on TV in his "man cave," scrubbing the bathroom floor on her hands and knees and other wifely duties.
Plus serving drunken men beer and chicken wings with a smile on her face while at the same time slapping their hands away when they try to pinch her bottom prepares a gal for those Friday nights when her future husband invites other men from the office over to watch boxing on TV or play poker.
Secretary for Church or Funeral Parlor
While some may question why I don't promote the job of a secretary in general, a gal who aspires to marry a man of quality and thus must maintain a reputation of virginal innocence while single faces far too much temptation working in an office outside the limited arena of church or funeral parlor.
Mondays through Thursdays generally don't pose a problem.
But how many a gal has seen her marriage prospects lessen after throwing caution to the wind when the boss breaks out the bourbon when the Friday 5:00 pm whistle blows? Once someone gets a reputation for being the sort of gal willing to Xerox her bare behind on the office copier it's hard to lose it!
Churchmen and funeral parlor directors are known for their propriety.
But a gal should keep her distance from the embalmer, as the job carries risk of getting contact highs from inhaling too much formaldehyde, thus rendering him overly frisky. And avoid employment in a Catholic church. Those priests know how to party!
Good luck to you in your search for Mr. Right. Be sure to send me a wedding invitation.
And for more useful information on this subject, check out my Pinterest board "Sassy Single Gals and Secretaries Spanked," a tribute to the erotic pin-up art and spanking cartoons of the 1950s and 1960s at https://www.pinterest.com/1950sWife/sassy-single-gals-and-secretaries-spanked/ I'm sorry dear readers, but I can't make a hyperlink with the iPad blogger app so you'll have to copy-and-paste. Or check out the Links List at the upper right-hand side of this page. 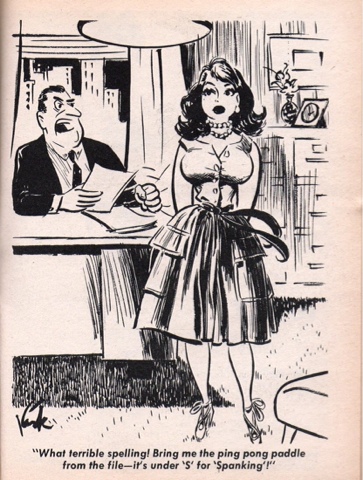