Dear 1950s Wife,
My husband regularly spanks me for my silly stunts. I was extra naughty recently and Hubby spanked my bottom Yuletide red. And he says Santa is going to get in on the act.
For several years now, our condo association sponsors a Christmas caroling party for the neighborhood with prizes going to the best singers. It was fun the first few times. But I've gotten really bored singing the same old songs year after year.
Plus I've never been chosen as best singer, which is really unfair because I've got a great set of lungs. Hubby always tells me so as I yell and scream while he's spanking me after my harebrained schemes go awry!
The top prize for best female singer this year is a state-of-the-art set of electric egg beaters I've always yearned for. So, with the help of my best gal pal Edith who lives with her husband Frank in the condo unit above us, I decided to sing a satirical Christmas song that I was sure make my fellow carolers bust a gut and bring me those egg beaters.
After we finished circling our condo community singing "We Three Kings of Orient Are," "Twelve Days of Christmas," and other chestnuts, I told the group to hush up and gather round because Edith and I had a special Yuletide song to sing: a brilliant satire of "I'm Getting Nuthin' For Christmas." Edith sang the song's traditional refrain while I belted out hilarious revised lyrics for the rest of the number.
But after we finished I was shocked to hear no clapping and cheering. In fact, the night air was completely silent until my husband began profusely apologizing and saying I was "going choo get a good talking choo." (Hubby's from Cuba and his accent becomes more pronounced when he's upset.)
Frank took Edith by the arm to lead her away muttering that he hoped they wouldn't be fined by the condo board because it was all my fault and that I'm always talking his wife into going along with my silly stunts and harebrained schemes.
Hubby marched me back to our building and up the stairs to our unit.
Boy oh boy did he give me a good talking to, shaking his finger at me all the while as he scolded me for my inappropriate juvenile humor. Then he put me over his knee, lifted my skirt, pulled down my panties and spanked me soundly with his hand.
Hubby's hands are very calloused and his arms quite strong from his weekend job of many years playing bongos for a salsa band. So a handspanking from him is no laughing matter. In fact, I was crying "Wah!" the whole time.
After he finished spanking me, Hubby marched me to the bathroom and washed out my mouth with soap. Then he told me to change into my babydoll nightie and get into bed.
As he sat on the bed next to me taking off his clothes prior to our usual nightly session of three-hours of bed-shaking sex, Hubby kept saying I shouldn't be surprised if Santa adds to my punishment by leaving a bundle of switches and lump of coal in my Christmas stocking.
I wouldn't mind getting the former as it would save me the effort of walking down three flights of steps and 200 yards to the common area to cut a set of switches when Hubby decides to punish me that way. But I can't see the benefit from a lump of coal, though I suppose I could use it to put soot on my face should I decide to dress as a hobo next Halloween.
Plus I really want enough room in my stocking for the 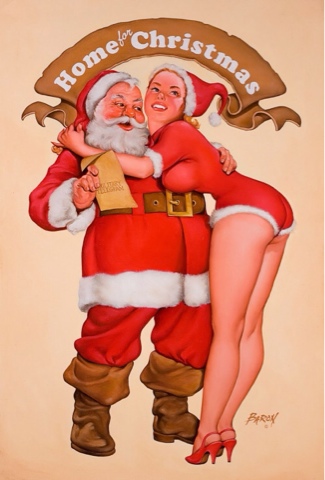