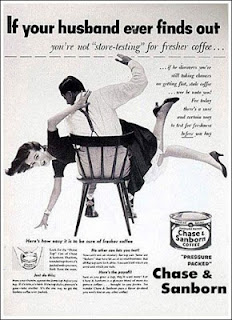 For the longest time, my husband wouldn’t buy me a computer tablet because he figured I’d waste time Facebooking, Twittering and watching “I Love Lucy” re-runs on You Tube when I should be cleaning house, cooking dinner and washing his clothes.

But after hearing from other 1950s-style husbands about useful computer applications for increasing housewife productivity, he bought me a computer tablet for my birthday. It’s been so helpful in keeping me on my toes.

For example, with the camera phone function, rather than taking my word for it, Hubby can visually inspect the house in his regular calls home during the workday to make sure on I’m on schedule.

Times before, I’ve been apt to take short cuts in the morning, such as giving the attic windowsills a quick once-over with the feather duster rather than a sound cleaning, in the hopes of freeing up time to watch my favorite soap opera. Then I’d down an afternoon “pick-me-up” of energy drink, three packets of sugar and a diet pill and “power clean” to catch up.

Now that I’m no longer tempted, I make steady progress through the day and give the attic windowsills the attention they deserve. And, by foregoing my afternoon tonic, I’ve gained five pounds in back, which makes Hubby’s spankings hurt less. Plus my breasts are once again full enough to balance the breakfast tray when I serve Hubby his bacon, eggs, coffee and toast in the morning.

They’re other great apps Hubby installed, including streaming music of John Phillips Sousa marching songs that are great for keeping time as I launder and iron, as well as a fabulous “time-and-motion calculator” that specifies the appropriate length for each household task down to the tenth of a second.

By implementing these measures, I’ve freed up seventeen minutes in my day, which affords me the opportunity to resume my cherished hobby of knitting Christmas sweaters for Hubby, Dear Ol’ Dad, uncles, brother-in-laws, nephews and male cousins in the family.

Of course Hubby refuses to allow Facebook, Twitter, You Tube and other time-wasting applications on my tablet. But, as sign of how pleased he is with my housekeeping and curvier figure, he’s decided I may install one recreational computer application on my tablet and expend eight of those extra 17 daily minutes on some “me time.”

After thinking about it, I’m going with Pinterest. All my non-submissive gal pals use it and they’re just a gaga about the neat “pin boards” you can find.

I told Hubby and he says OK as long as I don’t look at anything inappropriate such as boards advocating feminism and other liberal politics. But, as avid readers of your blog, we agree that I should check with you first for recommendations.

Do you know of any Pinterest boards especially appropriate for the submissive wife?

Interesting that you should ask for I just the other day heard word of a fantastic new Pinterest board, "The 1950s Well Spanked Wife" by Claire Colinsgrove.

While my husband normally allows me to use the internet just to post to this blog, in the interest of researching the noble practice of “wife spanking” and other cherished aspects of the 1950s lifestyle, I took a look. Certainly “The 1950s Well Spanked Wife” should be required reading for all submissive wives and dominant husbands, as well as vanilla couples willing to check it out as they certainly could learn a thing or two.

Along with hilarious 1950s-era “spanking cartoons” that celebrate the time when a husband wasn’t afraid to put his naughty wife over his knee and paddle her pert posterior, the board also includes totally awesome so-called “sexist ads” of the 1950s and 60s.

Photos are NSFW and posted for artistic purposes only. You must be 18 years old or older to read the blog.