Lost Job at Candy Factory and Spanked by Hubby :(

I lost my job at the candy factory after just one day because I couldn't keep up on the assembly line. I tried really hard to put the candy in the boxes but they rolled by so fast that I couldn't keep pace. I got so far behind that I ended up stuffing a bunch of candies in my mouth, but the forewoman caught me and fired me on the spot!

When I got home, my husband put me over his knee and spanked me until I cried for losing my job, then made me stand in the corner for an hour. After that, he spanked me again really hard for going off my diet by eating candy. And he says I have to look for a new job tomorrow! I try to tell him that "a woman's place is in the home," but he won't listen. Is he being unfair?

Unfair by tanning your bottom twice in one night? Of course not! If you mean unfair by making you look for work, 1950s Wife is generally of the opinion that "a woman's place is in the home." However, just as "Rosie the Riveter" did her duty during World War 2, in these troubled economic times an exception may be made to the rule. 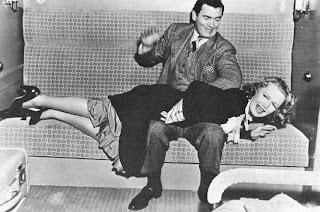 As you're clearly unfit for assembly line work, 1950s Wife suggests an alternative: humbly apologize to the forewoman and ask if you can at least be paid minimum wage for being made a daily example of the risk of assembly line idleness. Your husband can drop you off at the factory on his way to work. Before letting you out of the car, he should put you across his lap and spank your bottom scarlet red. Then you can spend the next eight hours standing in the corner in front of the assembly line with your skirt tucked up and your bright red bottom on display. This will aid the factory's productivity by reminding female workers of what awaits them at home by slacking off and losing their jobs, as well as improving your moral disposition by reinforcing your womanly duty to be submissive at work and home.